Miriam first went to Japan in 1975 and joined OMF International in 1986.  She subsequently moved to Hokkaido, in the north of Japan, where she works today.

The focus of OMF’s ministry in Japan is church planting. Since the early 1950’s over 40 churches have been planted, now mostly under Japanese leadership and part of a nationwide network of churches known as the Japan Evangelical Churches Association (JECA).

In Sapporo Miriam works in her local church in evangelism, leading Bible studies and working one to one or in small groups and preaching. She is also involved with the Hokkaido Gospel Broadcast ministry, a Japanese ministry reaching out in evangelism through TV, telephone and radio

I first went to Japan in 1975 and joined OMF International in 1986, when I moved to Hokkaido, in the north of Japan. Over the years I have been involved in various ministries but my current focus is Hokuei church and the Hokkaido Gospel Broadcast ministry. Hokuei, by the way, is pronounced Ho (‘hot’ without the t)- coo (as in the exclamation) -aye (the ayes have it) and means ‘Northern Glory!’

Hokuei was the second church to be planted by OMF back in the 1950s and is a strong congregation of about 130 members (average church size in Hokkaido is 30). 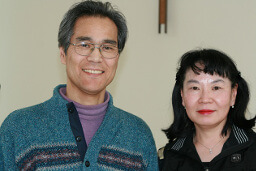 Pastor and Mrs Hanna Matsumoto have led the church since 1995 and my own involvement goes back to 2003. For most of this time I was the only ‘foreigner’ but in 2012 and 2013 the team was joined by Karin Storzinger, a single lady OMF missionary from Germany, and the Pain family with 4 children from UK. Both the Pains and Karin have main ministries independent of Hokuei church (outreach to businessmen and students respectively).

As well as being part of the leadership team, I have input through preaching and small group teaching, following up newcomers to church, doing seeker Bible studies, and post baptism discipleship training. Pastor Matsumoto is principal of Hokkaido Bible Institute, our small local training institute for full time Japanese Christian workers and very busy so it is great to be able to support him in his many responsibilities.  Another focus for me is building relationships in the local community, helping to make the church known and building bridges over which people can walk to church and to Jesus. 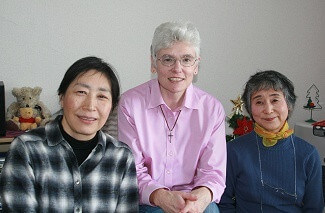 There is a great spiritual vacuum in the lives of many and this is the reason why I am committed to mission in Japan.  It is spiritually tough – the church is tiny.  A mere 0.2% of the population attends church on an average Sunday in Hokkaido. In my last 4 year term of service (2008-2012), I spent a great deal of time in Bible study with 6 people interested in hearing about the love of Jesus.  4 of them went onto baptism and are growing in faith. That is an average of one new Christian a year.  But that was much more fruit than I had had the privilege to see in previous terms. The church in Japan doesn’t grow in leaps and bounds but through careful discipling of the ones and twos. But what greater privilege can there be than taking the good news of the love of Jesus to the lonely, who are seeking for someone to pay attention to them, to give them purpose for living. Shinto and Buddhism, the traditional religions of Japan don’t satisfy. Jesus who said ‘I am the way, the truth and the life’ is the only one who can.

My personal goals are, first of all, to continue to grow myself as a disciple of Jesus. Then, secondly to be involved in intentional discipleship of others: that is, taking people from wherever they are on their personal journey and helping them to know God, know Jesus, follow faithfully and make him known. You can help share God’s love in Japan through your prayers for me.

If you would like to receive regular prayer letters or find out how you can support in other ways, please contact the church Missionary Secretary (Pat Harper).

Can you give me directions?

What does SBC have for my kids?

Can I find help with a life issue?

How do I tell you I want to join SBC?